Support from Bruce Harrell On July 8, 2015, Seattle City Council Member Bruce Harrell called for an interdisciplinary team to focus on the creation of a positive Town Center for the North Rainier Urban Village. 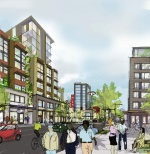 The Seattle Pedestrian Advisory Board, Formal Letter of Support: Our mission is supported by SPAB, and its core values for walkable urban Seattle.

Urban Design Framework: Before the rezone was adopted the City prepared a general design framework with an analysis of the areas needs. Attached to this Framework is the North Rainier Neighborhood Plan Update, which sets forth the community vision in detail.

First Hill Plan: This is an example of what can happen when our City agencies get together a true interdisciplinary team to create vibrant urban places. Since the 1990’s, there has been a call for this same level of focus in North Rainier Valley. We look forward to partnering with the City at MBTC, where the need to create an attractive area of public amenity is profound.

Baseline Report: This document reflects the diversity and demographics of the North Rainier Hub Urban Village, where 30% of the residents do not have cars and must depend on the City to fulfill its role in infrastructure development to overcome the inequity of blighted density.